Navis, a part of Cargotec Corporation, is the global technology standard for managing the movement of cargo through terminals. Navis combines industry best practices with innovative technology and world-class services to enable their customers to maximise performance and reduce risk. Based near to London Bridge they were faced with the dilemma of moving premises or improving the space that they currently occupied.

Moving locations proved to be the far more costly option which could also prove disruptive to the smooth running of their business operations: Their decision was to stay in London Bridge and refurbish their offices. As an industry leading multinational company, Navis needed to ensure that their offices in London incorporated their brand identity whilst optimising the use of space available to them.

The offices, set in a 19th Century Tea Warehouse within the Bermondsey Conservation Area, had many period features including; low ceilings, bare brick walls, a large number of wooden beams and pillars and limited natural light. Navis wanted to create a stylish and contemporary workspace which reflected the company’s image and brand identity whilst still incorporating the period features of the building. 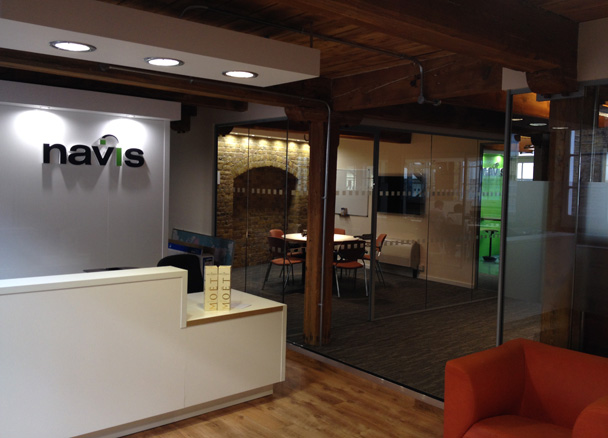 Interco Projects were appointed by Navis to carry out all of the refurbishment works including the CDM co-ordination whilst also being responsible for the project management and implementation of Building Control regulations.

Navis had to carry on operating within the premises as normal. This was a challenging requirement for both parties due to the nature of the works to be carried out. The project was phased and programmed to cause minimum disruption to both the client and surrounding neighbours. Temporary partitions were erected to prevent noise and dust pollution from affecting the day to day running of the business. The first stage of the refurb was a complete strip out and removal of all existing fixtures and fittings. All services including Air Conditioning, Electrical & data wiring as well as all of the existing partitions, joinery, ceilings, lighting, soft finishes and large existing shipping container doors had to be removed; creating an open plan environment and brighter working atmosphere.

A new contemporary reception area was installed with Navis company branding and colours. Komfort Polar Fully Glazed partitioned offices were erected with full height glass doors throughout the floor space creating large board rooms and private meeting rooms. This optimized the natural light within the office space and the acoustic properties of the glass maximised the noise insulation within the meeting rooms for added privacy.
A modern gloss white kitchen with integrated appliances was installed which added a nice contrast against the bare brick and dark oak pillars and beams. Bespoke tables were created to perfectly fit the board rooms and individual meeting rooms which also housed audio visual connections for monitors and laptops. Suspended light rafts were installed to focus light on to desks.

New bulkheads were constructed to house the latest LED feature lighting and to retain the existing the existing Iguzzini light fittings. New purpose made joinery was manufactured and installed including reception desk and storage units. Custom display and storage units were provided to the boardroom, reception, meeting room and kitchen areas. A state of the art Daikin Air Conditioning system was installed allowing for optimal working conditions, all year round.

New Oak flooring was fitted to the reception and Christy Carpet tiles were selected for the general office area with Dalhaus Vinyl flooring being used in the kitchen area. New Signage, Glass Write boards and all AV equipment were supplied and installed.

The project was valued at £146K and was completed as per the estimate and on time in 6 weeks.